Among all of the other important factors that cattle producers need to consider for running a smooth and successful production business, one most important factor is how the animals are being fed. The nutritional benefits of beef are dependent on the way cows are fed. In the present age, mostly cattle are grain-fed whereas in earlier times the cattle used to eat grass while roaming free.

The nutrients in cattle beef vary and it depends on what the cows eat. In countries where there is mass-production of beef, such as the United States, farmers usually feed grain to the cattle. The way cows are being fed can make differences to their consumers’ health.

The Difference Between Grass-Fed and Grain-Fed Beef

The calves, after their birth, drink milk from the mothers and they roam free in the fields to eat edible plants and grass. This practice usually continues for about 8 to 9 months and after that, they are moved to feedlots. Feedlots that are larger in size are known as Concentrated Animal Feeding Operations and these are where the cows are kept in stalls within the limited spaces.

They get fat rapidly because they are given grain-based feed made from corn or soy-based. Dried grass is also supplemented in their diet. And after living in these feedlots, the cows are sent or brought to slaughterhouses. It is not that simple as it sounds as feeding practices are varied and complicated. Such as the grass-fed beef of the U.S cannot be compared to the grass-fed beef of Australia. And it is not necessary that all grass-fed cows are able to graze outdoors.

Grass-fed cows eat grass as their feed whereas grain-fed cows mostly have soy and corn-based diet. Drugs such and growth hormones and antibiotics are also given to cows in order to maximize and boost the growth process.

The cows that are grass-fed depend on pastures as their source of food for their entire lives. Cattle producers who want to use the label ‘grass-fed’ are required to provide evidence that their animals are grass-fed and they also have to document the agricultural process they use.

Factors to Consider When Choosing Grain-Fed VS. Grass-Fed

Cows that live in a natural environment and eat what is considered as their natural diet are healthier and happier. They roam free and are more active. A well-maintained farm plays an essential role in this case as the cows living in feedlots can also be grass-fed.

Organic and grass-fed cattle beef is expensive more than grain-fed cattle beef because these cattle take longer to mature and occupy more space. This is more like adults living with their parents without paying rent as these cows can cost a lot to the farmers.

Grass-fed beef can be found in prices close to those of grain-fed beef if bought in bulk.

The meat’s taste depends on what the cow eats. The diet of cattle creates a major impact on the flavor of the meat. Analyses by laboratories can easily tell the difference between numbers of compounds in the taste profile of the cattle.

Grain-fed beef is more tender than grass-fed. Tenderness of the meat depends on how long the cattle eat grain. The same is the case with fat. Grain-fed cattle is more fattened and so it offers more fat and marbling. Whereas, organic, also known as grass-fed beef, is not as fat as grain-fed beef.

The nutritional profile of the cattle depends on what they eat. Grass-fed beef is rich in nutrition as compared to grain-fed beef. Red meat has a greater amount of nutrients. But as fat stores many nutrients, grain-fed beef can also benefit the consumers in a number of ways.

Cows that are raised properly create less negative effects on the environment. Cows that roam freely and graze on different lands increase the soil’s carbon carrying capacity. They can minimize the emission of greenhouse gasses through their grazing and protect the environment from potential harm.

For the improvement of flavor and maximize the growth of grain-fed cattle are given antibiotics. Feeding the cattle an unnatural diet raises the acidity in them, this combined with other unhealthy farm practices where the cattle are being raised, will not be good for meat consumers.

Farmers make use of hormones to increase the size of their cows and make the growth process faster than the usual. These hormones can be fed to both grass-fed and grain-fed cows.

Beef contains a very low level of hormones as compared to other sources of food. However, it is true that grain-fed cows contain more hormones than grass-fed cows.

When it comes to a healthier environment, grass-fed cows are the winners as these cows graze freely and through their grazing, they increase the soil’s capacity of carbon-carrying making the soil more fertile and suitable for plantation.

Milk quality is the same in all types of cows when it comes to vitamin D, calcium, and protein. But science shows that milk of grass-fed cows has an added advantage of nutrition and is a good source of healthy fat.

On diets like keto, caloric control is an essential aspect. Grass-fed beef contains healthy fats, minerals, vitamins, and is leaner. Therefore, people who are following such a diet should prefer grass-fed beef over grain-fed.

Grain-fed beef is more tender and rich in flavor as compared to grass-fed beef. It offers more marbling and fat. Grain-fed cattle offer more meat as they grow more than their natural growth and are large in sizes. They mature faster than the grass-fed beef and require less effort to deal with before sent to slaughterhouses.

How to Manage Animal Welfare in the Meat Production Industry

How ERP Software can Help to Empower your Meat Processing Business? 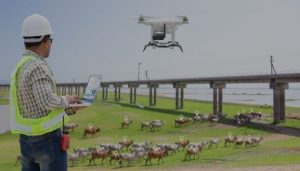 The Game of Drones in Agriculture 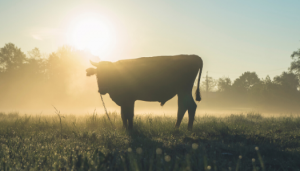 How Much Does a Cow Weigh in Pounds? (Beef, Calf and Dairy)